Skeletor: Why We Love Him 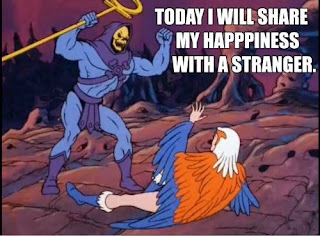 It's no secret that we love Skeletor on Back to the Eighties. He's one of our favourite villains of all time, right up there with the Joker, Mumm-Ra and David Cameron. But why? It's not as if by the end of the Masters of the Universe series he was particularly threatening, indeed, they'd turned him into He-Man's whipping boy at that point. No, seriously. Go back and watch the end of the second season of He-Man and the Masters of the Universe. He's pretty much no more than a nusiance by that point, and it's sad to see.

It was all so different at the start. In "Diamond Ray of Disappearance" Skeletor was a true threat, taken seriously by all. Yes, his "big plan" involved a hook and rope taking down Castle Grayskull, but at least it was a plan, and not just an idea which may grow into a plan as long as He-Man (or even just Cringer, or kids with a puppy cyborg thingy) didn't immediately throw a spanner in the works.

But why do we love Skeletor? Why does he work as a villain? There's not just one reason. He's funny. Really funny. He's usually got a witty one liner, or major league putdown to throw not only in the direction of his underlings, ("Dolts! Halfwits! Brainless idiots, you couldn't even beat a motley group of gnomes!" is a particular favourite) but also at the heroes as well - now this happens a lot these days, but back in the early Eighties is wasn't so much of a regular occurence, villains would be exceedingly poe-faced and would usually call out the heroes on their demeanour, but wouldn't usually stoop to name calling like "flesh face". By the way, "flesh face"? One of my favourite insults, EVER.

He's also duplicitous and overbearing, bossy and needlessly cruel on occasion. Yes, even in the Filmation series. He has absolutely no qualms about sacrificing his own men, one time even leaving Mer Man to the mercies of Evilseed, with Mer Man declaring that even Skeletor should have at least one good bone in his body, Skeletor responds with "There isn't! Never has been, never will be." Even in that episode, the ONLY reason ol' skull-face sides with the heroes is out of complete self-interest. 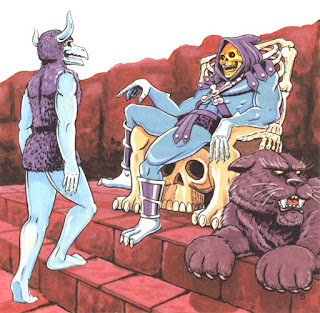 Let's face it, his look is another reason we love him. He's just so completely distinctive looking, there really isn't another villain out there who looks like Skeletor. It took ages to get somewhat of a definitive answer for why he looks the way he does, too. The original explanation, given in the He-Man minicomics, is that he's one of many of his kind, from an alternate dimension of Infinita, come to Eternia to take over Castle Grayskull to allow others of his kind to TAKE OVER THE UNIVERSE. That gets retconned (sorta) when it turns out that he's desperate for King Randor NOT to find Randor's half-brother Keldor, who disappeared years ago. This is again picked up in the 2002 Mike Young Productions version of MOTU, but this time Keldor has no familial connection to Randor, he just gets blasted in the face with acid instead of Randor. Of course, absolutely none of this is ever mentioned in the Filmation cartoon, he's just got a skull for a face, deal with it, yeah? 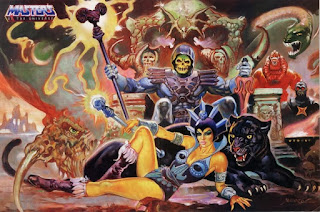 As villains go, in the big picture, Skeletor didn't really get an awful lot done in the Filmation cartoon. The 200X Skeletor was a complete beast, but again, didn't accomplish much. Still, he will forever remain a complete boss in the eyes of Back to the Eighties because he's a wiseass, skull faced, blue-skinned legend. Who is absolutely, positively, definitely, NOT nice.

Posted by Back to the Eighties Podcast at 01:12

Email ThisBlogThis!Share to TwitterShare to FacebookShare to Pinterest
Labels: cartoons, Filmation, He-Man, Masters of the Universe, Skeletor, Skeletor is Love