In 1983, TV-am began broadcasting to the nation at a revolutionary time for the UK - TV in the MORNING. BBC had started their breakfast programming a couple of months before, so they'd got there slightly late, but still, they were broadcasting. Sadly, due to many reasons (mismanagement, failing to gague the audience they were broadcasting to, failing to get any adverts to put in their ad breaks, and so on) TV-am was doing badly. VERY badly. Something had to be done. So, they brought in a puppet rat. This was Roland Rat - Superstar.

On Friday, April 1st, 1983, Roland appeared. Launched by future Teletubbies creator Anne Wood, Roland was there to give children some Easter entertainment during the school holidays. But, as ever happens with these sort of things, Roland's take-no-prisoners style of interviewing famous people, manner when talking with the actual human presenters of TV-am (where he would give none of them any respect - most of the didn't deserve it anyway) and general belief that not only was he a superstar, but he was, in a move that would be echoed by Chris Moyles at Radio One in the future, the "saviour" of TV-am, come to turn the beleagured channel's fortunes and flagging ratings around. He may have been right. With him on board the ratings rose from a dismal 100,000 to just over 1.8 MILLION. 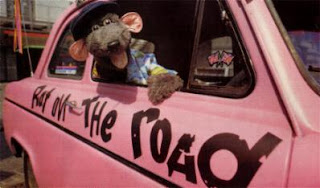 Roland's golden age on TV-am continued through 1983 to August 1985, Roland would appear during school holidays in half hour episodes, where his backstory was fully fleshed out, and new characters appeared in the mix, like Roland's very own superfan Kevin, a gerbil from Leeds obssessed not only with Roland but also the colour pink, Errol the Hamster, the Welsh VT operator who was so laid back he was almost horizontal, to Roland's brother Little Reggie, who seemed to serve no other function than to be extremely annoying and utter the phrase " Great ere, innit?" Hrm. 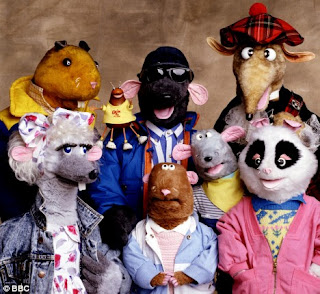 Roland even brought out a couple of singles during this period, the best (and most remembered) being "Rat Rapping". Whilst it didn't in any way set the charts alight, it's still fun, and a definite classic Eighties novelty record.

So much of a totem did Roland become for TV-am, that in August 1985 he was poached by the BBC themselves, although in retrospect, they didn't actually do that much with him. They gave him a series (imaginatively titled Roland Rat - The Series) which used the conceit of a chat show hosted by Roland to effectively rip off the Muppets (ironic, as Roland's puppeteer David Claridge had once workd for Jim Henson), but really, this was tame stuff. Eventually the BBC just stopped doing anything with Roland, almost as if the only intention was to stop TV-am being able to use him.

Roland still sometimes pops up to make the odd appearance, on The Big Breakfast and even Daybreak (offering to save that beleaguered breakfast show in the same way he had TV-am), but people seem to have largely forgotten him now. It might be just me, but that seems to be a real shame. Lots of today's celebs could use a grilling from Roland, I would think. Imagine Beiber or Beyonce getting a lesson in superstardom from Roland. Just imagine.

Posted by Back to the Eighties Podcast at 00:08